I want to share my experience at the Ritz in Ybor City last night seeing Testament play live! I’ll also have some coverage of the opening acts.

First of all, this was a phenomenal performance by all bands that played. Just a big crowd of meal heads listening to classic thrash metal.

On a side note, The Ritz in Ybor is one of my favorite venues for metal shows.

Alright, on to the thrash metal bands!

I’ll start with the main act, Testament. I remember the first time I heard Practice What You Preach. I was blown away by the track and the whole album. So Testament was my main reason for coming to the show.

They were loud, fast, and extremely tight. The band has awesome chemistry and you could tell that they were having fun on stage. These guys are indeed professionals.

Testament opened up with the first track off their latest album, Brotherhood of the Snake. I had listened to the entire album that morning during my leg workout. It’s actually one of my favorite Testament albums. They had a good mix of their newer and classic songs.

*Get Testament tour dates and schedule on their website here: https://www.testamentlegions.com/site/

I’m a pretty big fan of Alex Skolnick, but I loved seeing both guitar players play solos. It brings more dynamics to the songs. I didn’t expect that, but they were switching back and forth and the dynamics were musically astonishing!

Back to Skolnick, one of my goals, when I started playing guitar, was to learn from his playing. He has a very unique style and signature to his playing. And he was doing nothing short than ripping it up on stage.

I’ll never forget hearing his solos for the first time on the Practice What You Preach album, which is still to date my favorite Testament album. So it was extremely cool to see him performing on stage at The Ritz in Ybor.

These guys impressed the crap out of me! Sepultura had this extreme level of energy on stage. Their lead vocalist is a massive, muscular dude and very captivating. The drummer was all over the place and just doing things I’ve never heard.

It was pretty awesome because you could feel that Latin vibe in their music. The way they all move, the beats, and rhythms.

As much as I’ve been into various sub-genres of heavy metal music, I never listened to Sepultura that much. It was good to get a live taste.

Prong is another band that’s been around for a while that I never listened too much. I do recall people writing ‘Prong’ on their folders in high school along with the logos of other metal bands. And I did recognize a couple of songs.

Despite being a 3 piece band, they sounded full. Very cool stage presence and they did a good job of getting the crowd pumped up. This can be a challenge when you’re one of the opening acts as the crowd usually isn’t at full capacity. I have a lot of respect for these guys.

I was buying my Testament t-shirt upfront when this band started up. I got out there in time to hear the last 2-3 songs.

They were solid and very much into theatrics. They had face paint on and I can only imagine that if they were the main act, their show would have some cool props.

Convalescence is from Toledo, OH, which is where a close friend of mine is from. So naturally, I sent him a text a pic of the band right away.

Classic thrash metal music is where it all started with me. And Testament’s Practice What You Preach album that was released in 1989 is very dear to me, to this day. I followed them for the next couple of albums but went through a period where I didn’t keep up with them much.

That all changed when they released this latest album, Brotherhood of the Snake. I’ve also been listening to some of their recent releases since.

I had a blast at this show and would definitely see Testament again if they were to come back into town.

Oh, and I posted some live footage on Facebook, so check that out if you missed it.

I’ve been an Arch Enemy fan for a couple of years now. I END_OF_DOCUMENT_TOKEN_TO_BE_REPLACED 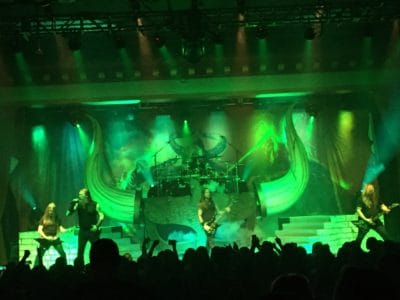 In the deepest, darkest realms of the underworld, the heaviest of metal awaits END_OF_DOCUMENT_TOKEN_TO_BE_REPLACED