How to Transition from 6 to 7 String Guitar: 3 Simple Tips

Are you just starting to transition from 6 to 7 string guitar? Or are you thinking about making the jump? (If you’re thinking about, just do it…and read this now, and again after you get it).

There are some challenges that come with that extra string! And if you’re a beginner 7 string guitarist, you’ve definitely experienced this. But that’s ok…I’m here to help you!

In this post, I’m going to show you exactly to get used to playing your 7 string, and how to become a better 7 string guitarist, faster! 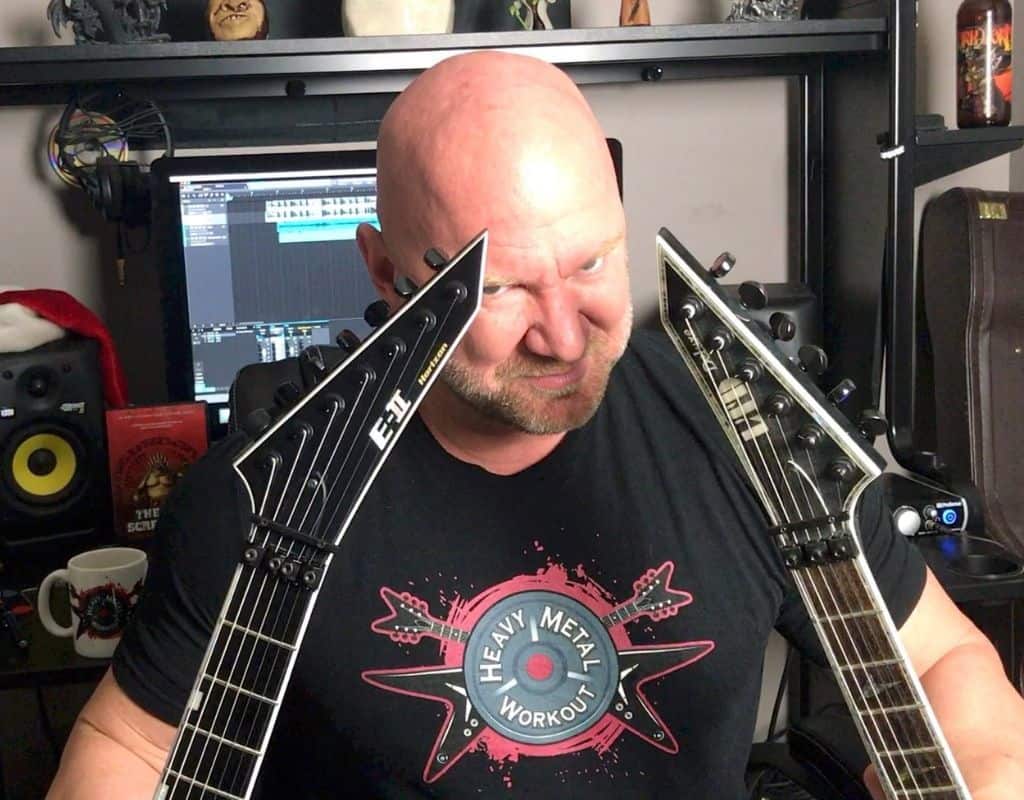 The majority of us guitar players start out on a 6 string. Hey, it makes sense, right? You’ve got to learn the basics.

But you wanted something heavier. Welcome to the world of 7 string metal!

There are some challenges you may face with your new 7 string though. They are:

I experienced all of these things the first time I played my 7 string. But it’s going to be ok, I promise! In the most cheesy words of Bon Jovi, ‘I’ll be there for you,’ and these tips you’re about to learn are going to help!

7 String Guitarist Problems (This May Piss You Off a Little)

When you first start playing a 7 string guitar, you have the tendency to only play those heaviest notes possible.

I’m just going to say it – that will to lead to complete musical boredom! Yes, I realize we’re playing metal here but you still want to have some diversity in your music and songs.

The other problem I see with beginner 7 string guitarists is, because they’re addicted to those heavy notes, they tend to overplay those notes. Soon, their sound becomes robotic and everything sounds the same(…yawn).

Some bands do this as well, albeit probably by design. And they kill their opportunities for riffing – they’re just playing a few open notes or power chords for the sake of sounding heavy.

That also leads to musical boredom! Don’t just hang on those heavy notes. Throw in some other progressions, higher notes and power chords, and metal riffs!

Preliminary Step – Put Your 6 String Away

This may be an obvious step, but I’m going to ask you to put your 6 string guitar(s) away for awhile.

Because you need to dedicate every second of your practice time to your 7 string.

If you try to flop back and forth between your 6 string and 7 string, it’s going to hold you back.  Just trust Jason on this (that was in third-person cause it just seemed like the right thing to do). 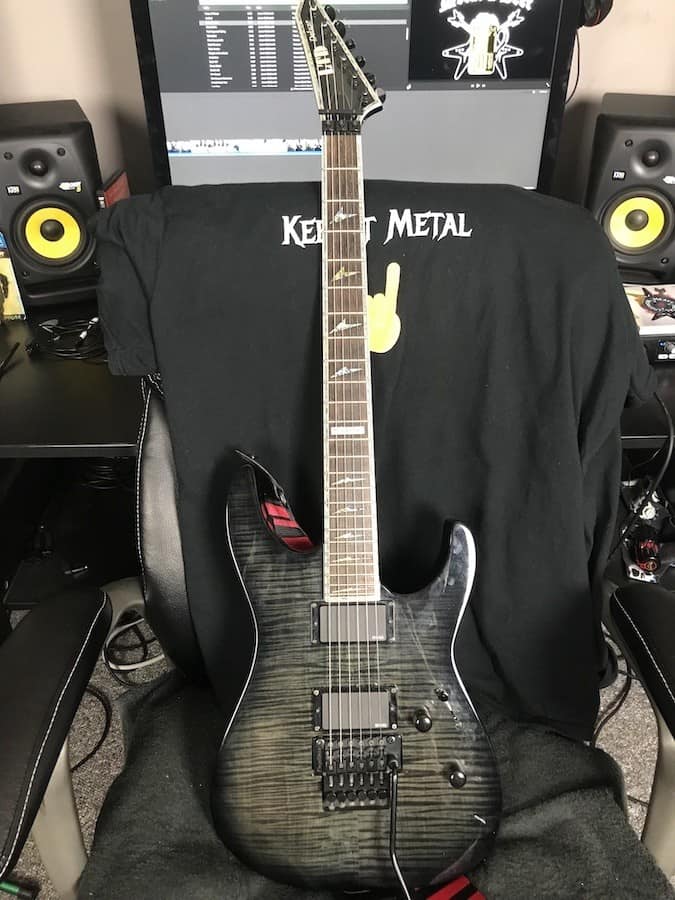 “What?? That’s the reason I got a 7 string – to play the B string! Jason, in the words of Napoleon Dynamite, you’re a friggin’ idiot!”

One of the major challenges I had when I first got my 7 string was playing songs I would normally play on my 6 string. That 7th string kept getting in the way, and for a moment I went into a time lapse to where I picked up the guitar for the first time! It was weird.

I kept screwing up, even playing my own songs that I had written (on a 6 string). And my goal was to add that 7th string into some of my songs that I was writing for an album, but I didn’t want to change the entire key of the song (although some of them I did, because it sounded cooler).

What did I learn from this, and how did I overcome? I kept playing my 7 string but stopped playing that 7th string. I know…you’re like ‘Dude, what? This does not compute!’

But keep reading below to find out exactly what I did (an this worked!)…

This is going to allow you to become more comfortable with that extra string being there. And don’t worry, you’re going to play it. Just not quite yet.

2 – Practice Full Chords on Your 7

In that week of not touching that 7th string, I also want you to spend some time playing full chords on your 7 string (just on the 6 string, E through E). This is where it’s going to really bite you!

Take a step back and start playing those regular chords, like a full Em, C, G, D and so forth (that’s actually a really cool melodic progression!).

Yes, it’s frustrating. But that’s ok because that’s exactly I’m having you to do this exercise.

You’re going to become super familiar with your 7 string without losing your ability to play everything else. And follow the below schedule will help you overcome this faster.

During this first week, I recommend setting a practice schedule. And I also recommend that you play your 7 string everyday, for a long time. I’m going to get into that later.

Here’s an example of a guitar practice schedule you can follow for that week:

Repeat this for another week if you don’t feel like you’re getting used to your new 7. Then move on to step 3 below…

It’s been a week and you’re ready to start making your guitar growl with that 7th string! And if you’ve been playing everyday for a week with just those 6 strings, the time has come for the 7th.

What I recommend is that you don’t go full on 7 string right away. I recommend that you make the transition from 6 to 7 strings a gradual one. And here’s why…

You want this transition to truly be organic (not organic like organic oatmeal or bananas…well, okay, maybe it is like that). Anyway, my point is you want this to a natural transition from 6 to 7 strings, not forced. 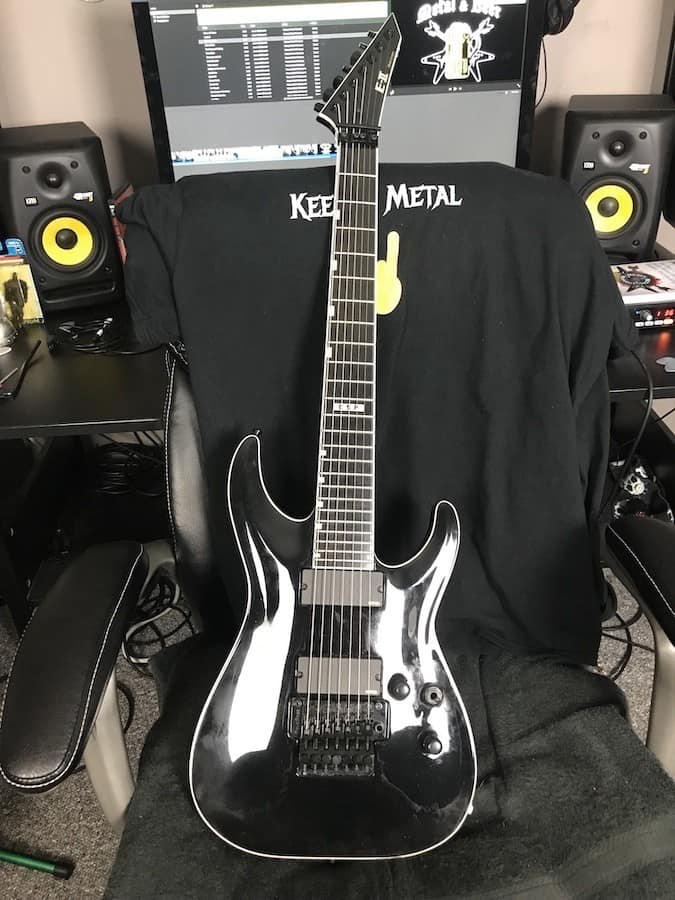 Now I’m going to give you some 7 string chords and riffs to practice below. So if you don’t have it in your hands already, go grab your 7 string guitar!

This first lesson is a simple way to easily and quickly get accustomed to that 7th B string. There’s also guitar tabs below.

**You won’t actually be playing a ‘minor’ for E and B since you’re just playing power chords, but in theory, those are minors – hopefully that makes sense.

Now I want you to practice some 7 string riffing. Here, I’m going to show you a few simple riffs. And I’ll give you the guitar tabs as well as a video so you can see what I’m doing.

The reason I’m putting this out there is because you don’t want to be one of those that just play the heaviest notes possible all the time. You need to play riffs on your 7 string!

As I mentioned, this is the problem with many beginner 7 string players. They become obsessed with the B string and play nothing else.

As a result, they’re ability to play actually riffs diminish. This is a sad, sad case. Do not let this happen to you!

You may notice that you’re not starting this riff on the typical heaviest note (the open B string). I did that on purpose.

I’m forcing you to start somewhere on the fretboard that you wouldn’t typically start with. This wasn’t to throw you off – it was to make you more aware of your surroundings on the fretboard.

You see, starting on that 2nd fret triggers your brain to think differently and opens up new pathways in your mind, which you’ll connect to the fretboard.

This will ‘free you’ from always reverting to that heaviest note, which will boost the creativity in your playing.

Yeah, I know…that sounded like some new age hippie stuff (hippies are cool…I’m not making a jab), but seriously, it works.

Here’s the video version of the riff you just learned…

Your goal should not be just to play the heaviest notes with your 7 string. If that is your goal, then go sell your 7 string and start playing the tuba or something.

Sure, the majority of what you write and play may be based on that 7th heavy B string. But this doesn’t mean you should abandon the rest of the fretboard!

And this is a major temptation of playing a 7 string. Those heaviest notes sound cool! Hey, I get it.

But here’s the problem. If all you do is play those few heavy notes then all of your riffs and songs are going to sound exactly the same. There are many bands (with both 6 and 7 string guitars) that do this.

Then you get to track 7 and you’re like ‘Wait a second, is this track 4 again?’

Yeah, you don’t want to do that. I encourage you to venture out on the fretboard. If your first 2 songs start in the key of Bm, hitting that supe heavy B power chord, then make sure song 3 is in Em, or C#m, or even Am.

*They don’t have to all be minor keys…actually, yes they do. We’re not playing ‘happy metal’ here!

So here are your 7 string guitar rules…

Video: Transitioning from 6 to 7 Strings

Oddly enough, I never down-tuned or drop-tuned any of my guitars.

What I did to make my overall mix heavier was I recorded my music with a 5 string bass.

It wasn’t until the summer of 2018 when I bought my first 7 string guitar. Mind you, I’ve been playing guitar (primarily metal) since 1990. 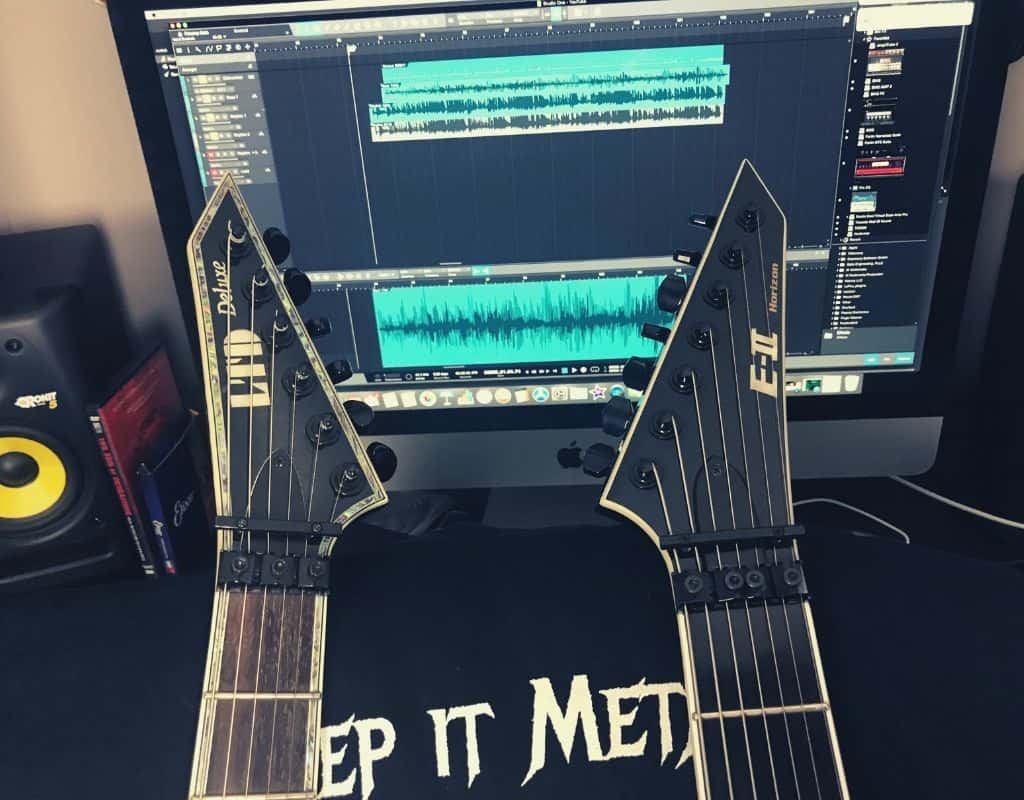 I was on the fence about getting a 7 string guitar for a long time, and finally made the jump. I expected to just pick it right up and start recording with it, but I quickly found out there was learning curve here!

Seriously, it was like that extra B string was like an extra weird body part that was growing on me…it was in the way!

That’s why I created this post. And I really hope these tips help you get through those challenges of transitioning from a 6 to 7 string guitar.

Now, another note is I did not buy a 7 string guitar just to play heavier notes. I wanted that extra string because it gives me more options on the fretboard.

I personally don’t see the point in just playing lower notes. In fact, you lose some of the tightness the lower you go. That doesn’t work well for riffing.

I hope this post and the videos I included helps you! Leave me a comment below if you have any questions.

Welcome to the Jason Stallworth Music Gear page! Below you’ll find all the END_OF_DOCUMENT_TOKEN_TO_BE_REPLACED

To date, this is the absolute best heavy metal guitar tone that I’ve END_OF_DOCUMENT_TOKEN_TO_BE_REPLACED