Are you struggling with dialing in a metal tone using BIAS FX? (here’s where you admit you have a problem so we can fix it!)

In this post, I’m going to give you my exact amp, EQ, and effects settings for my metal tones using Positive Grid’s BIAS FX plugin.

In fact, I’m going to give you my settings for 2 albums I recorded using BIAS FX, and several other tones.

Go grab your guitar, pull up your DAW and load BIAS FX into a new tracks…we’re going to get to work!

What Is BIAS FX?

If you already own or are at least familiar with Positive Grid BIAS FX, then you can skip this section and start with the 92 Treadplate tone below.

But if you’re a newbie to BIAS FX, or the world of amp VSTs and plugins in general, I want to give you a short rundown…

BIAS FX is a virtual amp modeling simulator, also called a plugin or amp sims. These amp simulators are designed the mimic the sound, tone, and feel (although that last one is a stretch) of a real amp.

BIAS FX contains a generous suite of amps, and also comes with cabinet, speaker, and effects simulators. So you pretty much have an entire rig with multiple tones at the mercy of your keyboard.

Amp sims used to suck! Big time! But over the years, technology has come a long way. And in my opinion, Positive Grid is one of the leader’s of this bunch.

If amp sims and plugins is completely uncharted territory for you, then I have a video on how to use plugins…this will help you get started:

The 92 Treadplate amp sim was hands-down the reason I decided to purchase the the BIAS FX desktop pro package. I was looking for a good Mesa tone and at that point, and the other amp sims I was using just wasn’t cutting it.

***Oh, I used the ’92 Treadplate for my 2nd studio album Heavy Metal Workout (more on that below!)…

Now, I’m not saying the 92 Treadplate sounds and feels like a playing through a real Mesa Boogie Dual Rectifier (this is the amp it’s modeled after). In all reality it probably doesn’t.

But I personally don’t care about replicating a sound. If it’s in the ballpark range and the recorded is tight, and more importantly, if it sits well in the mix, then I’m happy.

So don’t get caught up in the ‘it doesn’t sound like a real amp’ syndrome. The question you should ask it does it sound good, period!

I’m going to spend a little more time on the 92 Treadplate because it has been my go-to BIAS FX amp out of the many metal amps available in BIAS FX.

The ’92 Treadplate will replicate metal tones from bands like:

Below are my basic metal rhythm settings. In fact, my settings are similar across the board. I don’t generally make huge variations.

I cut the bass back to give room for the bass guitar and kick drum. Mids are cut a little but not overdone. On this particular amp model (BIAS FX Treadplate or any Mesa sim), I end up cutting the presence back quite a bit.

**the 2 cabs/mics are explained below…

More on Cabs and Mics

I encourage you to play around with the mic placements. This is where you’ll get the most variations of metal tones. Also try different cabinets and see how that sounds.

In fact, I use the SM57 mic for one track and the C414 for the other (I generally record two rhythm tracks and hard pan each).

And I sometimes use the Orange cab with the SM57 for leads…that really allows your guitar solos to stand out and cut through the mix!

More on Effects and Leads

I don’t typically use a lot of effects for rhythms other than a noise gate and tube screamer sim. For leads, I’ll throw in delay, and now and then a little reverb. But there’s a ton of effects you can mess around with in BIAS FX.

I wanted to touch on my leads using 92 Treadplate Mesa Dual sim.

My settings are the same as my rhythms other than a slight boost on the a few things. I boost the gain to about 7-8, bass to 5 or so, and mids are boosted to a little over 6. And I’ll add the delay.

**For effects and leads, this applies to everything (so I won’t replicate this on the amps below). But just because I take the simple way on these things doesn’t mean you have to! 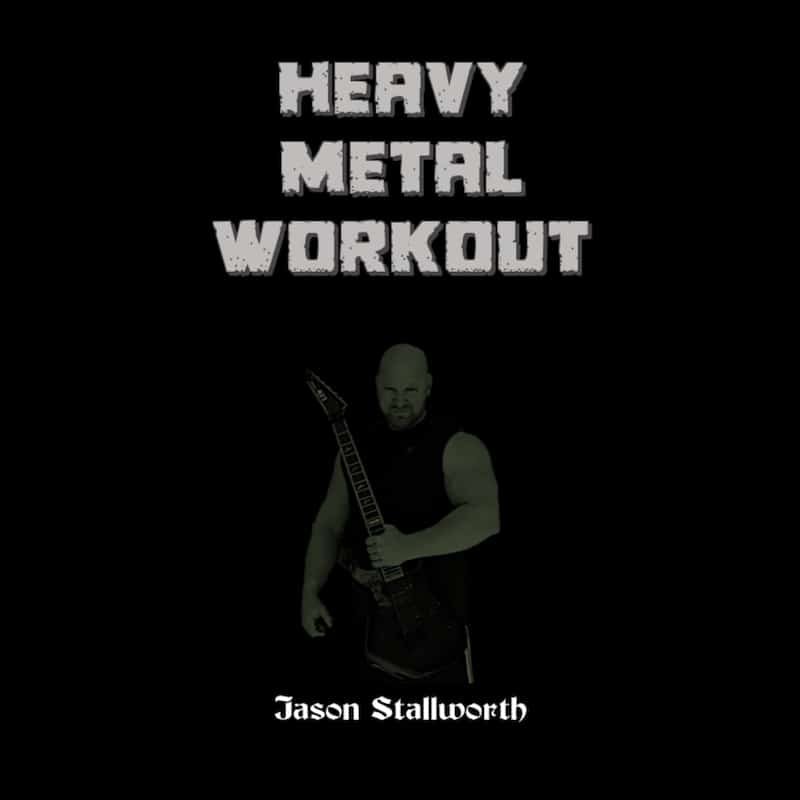 This is an instrumental classic metal style album with lot of riffing and chunky rhythms, which the 92 Treadplate worked perfectly for!

Read more about this album ​here​.

After recording my first album with the ’92 Treadplate I had decided to continue using BIAS FX for another album. But I wanted to find a different tone…a more darker tone!

That ended up being the BIAS FX Insane Satan amp sim.

For starters, I’m not a big fan of using anything named ‘Satan‘ but I decided to put any superstition aside and just go with what I thought would fit the album.

I’m fairly certain the Insane Satan is modeled after the Randall Satan (if I weren’t so lazy I would just look that up, and I’m pretty sure that I have before but forgot!).

The Insane Satan will give you metal tones from bands like:

Below are my Insane Satan amp settings. It’s important to note that I was looking for a darker tone, but also very tight because there’s a lot of fast alternate picking on the album I used this tone for.

You may find these settings to be a melodic death metal tone. And there’s a tremendous focus on the cabinets for these tones, which I’ll go into more below. 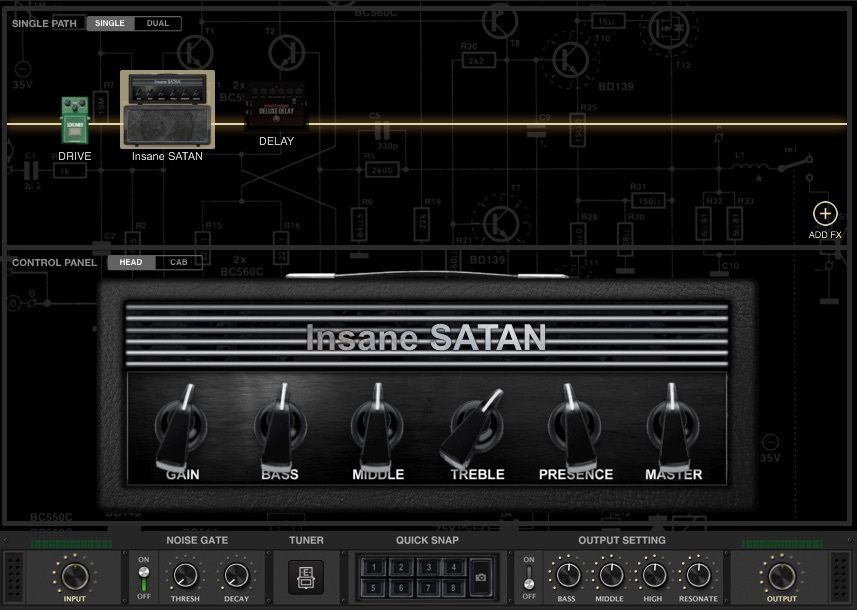 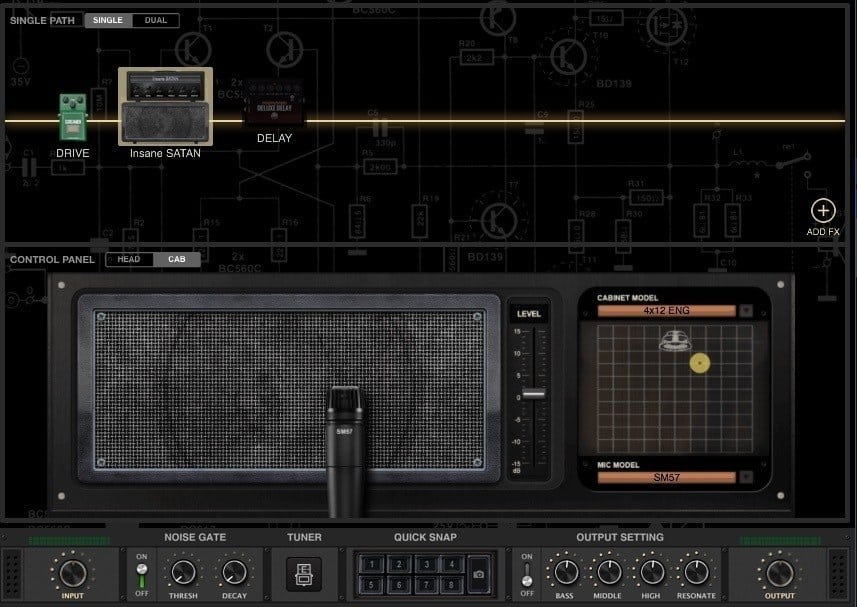 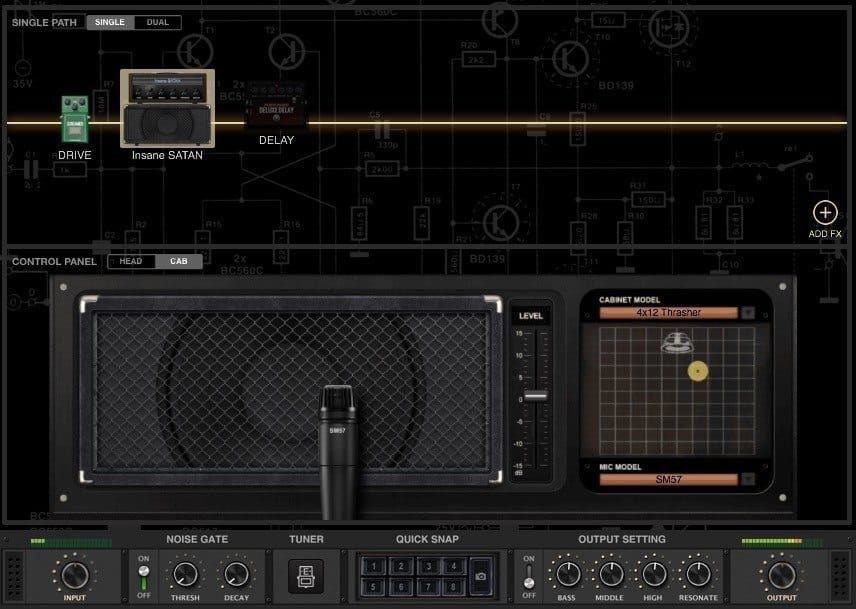 More on the Cabs and Mics

You can play around with different cabinets and mics and get some awesome tones. I’m going to give you my favorite combination for the tight tone needed for fast riffing.

For one rhythm track, I used the 4×12 ENG cabinet. This is modeled after the ENGL cabinet. If you’re like me, anything that remotely sounds like an ENGL is gonna be killer!

The SM57 mic sim pairs up really well with the ENG cab. Scroll up a little to the images and you can see my mic placement. Start there and move it around to where you like it (the ideal tone for you may be different from what I prefer, and that’s ok because no one wants to listen to music that sounds like everything else!).

For my second rhythm guitar track, I paired the Insane Satan amp with the 4×12 Thrasher cabinet.

Let me just say this cabinet is a super beast. It’s dark, heavy, and has this growl to it. Yet it’s one of the most clear sounding cabinets from the BIAS FX suite.

I also used the SM57 mic for the 4×12 Thrasher. I positioned the mic a little closer to the cone than with the 4×12 ENG, as you can see. I did this to help balance the bottom end.

These two BIAS FX cabs, ENG and Thrasher, are a fierce combination for metal tones! 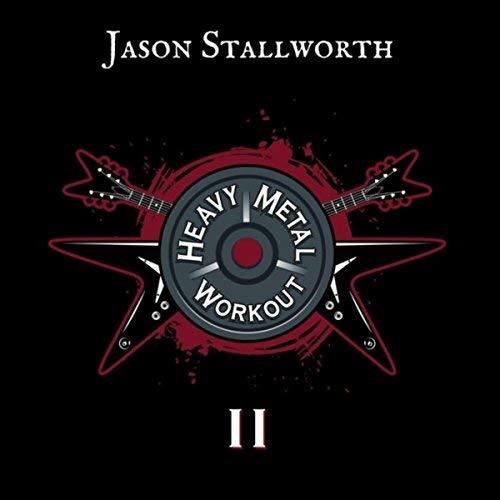 It required the tight and dark metal tones that the BIAS FX Insane Satan delivers.

Now we’re venturing metal to more of a hard rock tone. The BIAS FX Snake’s Lead 800, based on the Marshall JCM800, puts out some pretty solid tones.

In the video below, you’ll hear two types of hard rock tones; my rhythm and lead tones. I purposely wrote a piece of music that consisted of chords ringing out as well as choppy riffs because I wanted you to hear the diversity this amp sim has. I did the same with the guitar solos (some notes are milked and there’s some fast soloing too).

The Snake’s Lead 800 amp will general tones from bands like:

What you see above is my standard rhythm hard rock guitar tones with the Snake’s Lead 800. My lead tone isn’t much different. I crank the gain a little and add just a hair more bottom end, and usually bring up the mids as well.

I also use delay for my guitar solos (and occasionally on rhythms if I’m going for an 80’s hair metal sound! And do NOT even pretend for one minute that you don’t like hair metal!).

More on the Snake’s Lead 800 Tones

The BIAS FX Snake’s Lead 800 amp works extremely well with simple settings. You can start with my amp and EQ settings above, or just start with everything up the middle and tweak from there.

It might sound like ‘Duh’ but the heavier your music is, the more gain you’ll want from the amp. In fact, don’t be afraid to crank it all the way up. Because the Snake’s Lead 800 does not carry the amount of gain as, let’s say, the 92 Treadplate.

You will probably want to put the tube screamer sim (or some sort of overdrive sim) in front of the amp. Especially if you’re using more gains. This will tighten up the tone.

The beauty of the Snake’s Lead 800 is you can back off the amp’s gain and get some really cool tones. It’s an extremely diverse amp sim.

Of course there are more BIAS FX amp models you can use for rock and metal. I just gave you my personal favorites above.

Below you’ll get to see (and hear!) some other cool tones!

I came very close to using the o4 Insane 5153 amp instead of the ’92 Treadplate for my Heavy Metal Workout album.

I didn’t mess around with the Mark IIc amp much until later. And to be honest, I rarely use it. But listening to the video below, it does put out some cool metal tones.

There’s just something about this tone that I absolutely love, even though I rarely use it (because it’s not geared for metal).

TIP: Try pairing the Orange cab with a high gain metal amp, as I mentioned earlier!

What Are YOUR Final Thoughts on Positive Grid BIAS FX?

I’d be willing to bet you’ve played through your fair share of amp sims and plugins. Their convenient, and most of us don’t have ideal situation to crank up a half stack.

The problem has been finding an amp sim that sounds realistic. To me, Positive Grid’s BIAS FX comes very close. And in reality, most people aren’t going to be able to tell if it’s a real amp or plugin. Think about it…even when real amps are recorded, they go through some sort of digital processing after the fact.

I guess it’s obvious how I feel about BIAX FX, having use their amps for 2 albums. But I’d like to know your thoughts.

Welcome to the Jason Stallworth Music Gear page! Below you’ll find all the END_OF_DOCUMENT_TOKEN_TO_BE_REPLACED

To date, this is the absolute best heavy metal guitar tone that I’ve END_OF_DOCUMENT_TOKEN_TO_BE_REPLACED

Whether you’re playing live solo gigs or playing with a full band, you END_OF_DOCUMENT_TOKEN_TO_BE_REPLACED

We noticed you're visiting from Spain. We've updated our prices to Euro for your shopping convenience. Use United States (US) dollar instead. Dismiss