There’s one area guitar amp sims and plugins have fallen short: cabinets and speakers. Most of them suck!

I had been seeing ads for Positive Grid BIAS Amp 2. I also saw that they had a special package with Celestion Classic impulse responses. After spending a little time with the demo, I made the jump and upgraded.

Let me just say that the Celestion speaker impulses with BIAS Amp 2 changed the entire realm of virtual guitar tones!

In this post, I’m going to demonstrate the Celestion Classic Pack that comes with the BIAS Amp 2 Elite suite (hey, that kinda rhymes…sweet!). I’ll also give you some more Celestion tones using different amps.

In the below video, you’ll hear a demo of all 5 BIAS Amp 2 Celestion Classic speaker impulses available.

To add, the BIAS Amp 2 plugin gives you the option of using the cabinet sizes:

As you would expect, I went straight for the 4×12 cab on all of the the clips you’ll hear!

Now I’d like to go through a quick rundown of each BIAS Amp 2 Celestion speaker I used. These are in the order you heard in the video above…

The Celestion Blue is the first speaker used in the mix. I really like how this sounds for metal, although it’s not typically a heavy metal speaker. But it seems to really bring out the notes for metal.

Also, it’s sometimes a good idea to use a speaker that may not be designed for your particular style of music to get a different sound. I think we’re all a bit tired of new bands coming out sounding like every other band!

The G12-65 is probably my least favorite BIAS Amp 2 Celestion speaker for metal. I can’t pinpoint it exactly, but there seems to be a weird frequency I’m hearing.

The Celestion G12H Anniversary sounded cool but wasn’t my favorite speaker for metal. But I did test this on some clean and lighter rock tones, and it sounded spot on!

Also, I could totally see recording one metal track with this and using a different Celestion speaker (like the Blue or Vintage 30). I think the blend would sound cool. Remember what I said above about creating a new sound!

The G12M Greenback is just a beast for metal! In fact, many metal guitarists have been known to use the physical Celestion Greenback speakers for their saturated tones.

This is one of my favorite Celestion impulses because it gives your metal rhythms a tight and pronounced tone.

The best tone I’ve gotten is mixing the Celestion Vintage 30 with the G12M Greenback impulses. Here’s what my personal BIAS Amp 2 tracks look like:

**For my lead tracks, I use the Vintage 30 as this impulse really cuts through the mix.

**You can read more about Celestion teaming up with Positive Grid here (and my video is actually featured on this page too!):​ https://www.celestionplus.com/news/bias-amp-2-with-celestion-irs-what-do-the-pros-think/

I’d like to share with you how I recorded these tracks in the BIAS Amp 2 Celestion impulse comparison video (a little secret…this is how I record the guitars for most all of my albums and projects).

For the amp, I used the BIAS Amp 2 Triple Treadplate for both rhythm guitar tracks. This is based on the Mesa Boogie Triple Rectifier. As you may have read in my BIAS FX Metal Tones post, the Treadplate has been my go-to Positive Grid amp.

Now here’s where things get interesting; I used a different mic for each track.

Having slightly different tones for each guitar track will make your mix sound tight and full. And one of the best ways to do that is by changing the mic, especially if you want to use the same amp and cab.

**Below, I will share another secret on how I use different mics and cabs to get killer metal tones! 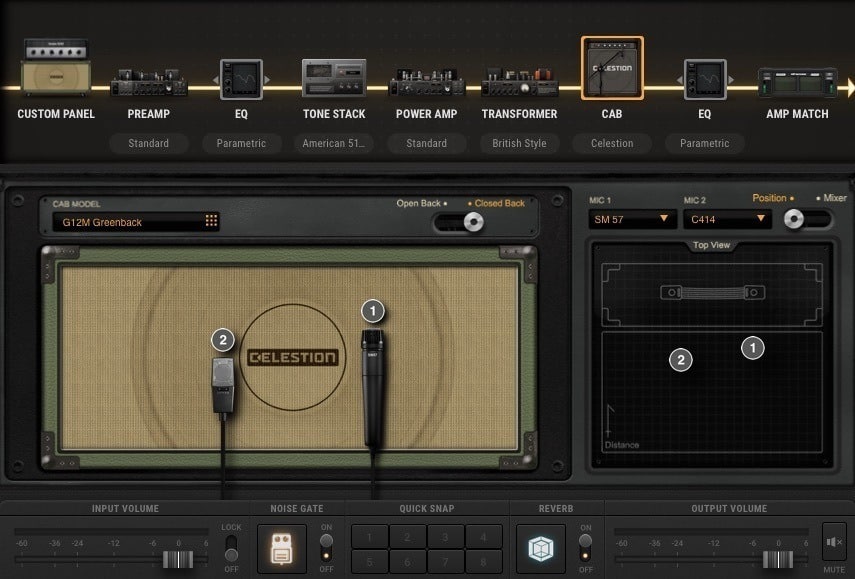 I had thought of creating a separate post for BIAS Amp 2 but I realized that I never use any of the other speakers and cabs. I only use the Celestion Classic package!

And to be transparent, when I purchased the first generation BIAS Amp suite (this was soon after I got BIAS FX), I really wasn’t all that impressed. The amps in BIAS Amp sounded the same as the ones in BIAS FX.

As I mentioned in the beginning, what drove me to get BIAS Amp 2 was the Celestion Classic impulses. If it weren’t for that, I would not have bothered upgrading.

So I want to give you my TOP 3 METAL TONES below using BIAS Amp 2 and the Celestion impulses.

I’m starting out with the amp sim I use 90% of the time when recording. The Triple Treadplate, which is clearly based on the Mesa Boogie Triple Rectifier.

The tones are split up into 3 parts:

The first half of the single track I recorded was the BIAS Amp 2 plugin by itself using the Triple Treadplate amp. I wanted you to hear the metal tone I was getting so that you would have an idea of how this would sound during your practice and writing time.

This is the raw amp tone from the Triple Treadplate. There’s no overdrive in front of the amp and no additional effects.

I did use the post-EQ within the BIAS Amp 2 plugin. I didn’t change the settings for the preamp, tone stack, power amp, or transformer.

For the second half of the single track, I opened the BIAS FX plugin and pulled my BIAS Amp 2 Triple Treadplate amp.

I did this because I wanted to be able to place an overdrive pedal in front of the amp. Most modern metal is recorded this way, whether using a live amp or plugins. This helps tighten the tone and smooth out some of the harshness from the amp.

The BIAS FX Screamer sim, which is modeled after the Ibanez Tube Screamer pedal, works best with the BIAS Amp 2 Triple Treadplate and creates one heck of a metal tone. At least that’s my opinion.

For the Screamer, the drive was all the way down and I had the level set at seven. I know some turn the volume all the way up, but I’ve found a sweet spot at around 7.

Lastly, the cabinet I used throughout this entire video is the Celestion Greenback, 4×12. I like how this pairs with the BIAS Amp 2 Triple Treadplate and I also like the Celestion V30 cabinet with this amp sim.

Now let’s talk about the most important aspect of any metal tone: how it sounds in the full mix.

I went through my usual recording process to capture these tones. This entails recording two metal rhythm guitars and hard panning each. And of course I had the bass guitar and drum tracks.

To make it easier for me, I went back and re-recorded the guitar tracks from the song Skull Crusher off my first Heavy Metal Workout album.

For the full mix, I continued to use the combination of the BIAS Amp 2 and BIAS FX plugin. The Triple Treadplate sounds great without the overdrive, but it sound much better with it in the full mix.

My Secret To Awesome Metal Tones

I have found that using a slightly different tone for your 2nd guitar tracks does wonders for the mix.

This doesn’t mean you have to use an entirely different amp or even different settings (though that’s not a bad option either).

Try mixing cabinets and mics on your rhythm guitar tracks.

Here’s my formula for using the Triple Treadplate amp with Celestion IRs:

Just that subtle change will produce an amazing overall guitar tone in the mix, especially for metal guitars! 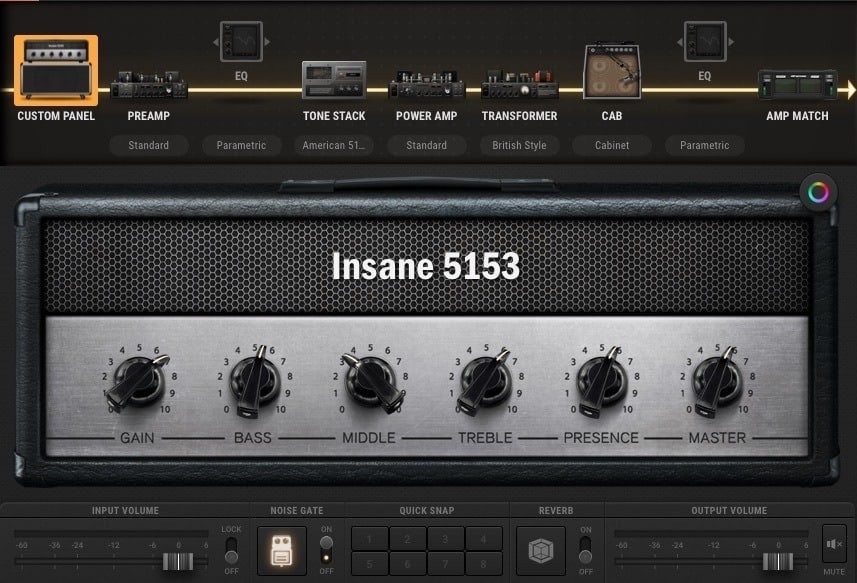 Another cool metal amp in BIAS Amp 2 is the Insane 5153.  It’s my 2nd favorite behind the Triple Treadplate because it offers a ton of gain but with extreme clarity.

You can distinguish each note played and it sits well in the mix. That’s expected, as I believe this amp is modeled after the EVH 5150 III.

I didn’t mess around with the settings much other than some slight shifts in the EQ. I also didn’t pull in any effects.

Normally I would put the Screamer sim in front of the amp. But the gain on this amp is so tight you really don’t need one.

For cabinets, I used the Celestion Greenback G12M speaker. I did something a little different this time though. I used 2 mics for the one speaker (SM57 and C414 sims). I feel like this made the tone even tighter.

And remember the secret to awesome metal tones I mentioned earlier? I’m using that method in this video!

I did not pull BIAS Amp 2 into the BIAS FX plugin though. I did use another Tube Screamer plugin, the TSE808, which you’ve probably heard of (it’s a free sim).

One thing you’ll notice in the video is I’m not a fan of deep editing BIAS Amp 2 offers. I know it sounds weird being a guitarist and all, but I’m really just a plug-in-and-play type of dude. And I can easily do that with this plugin, especially with the Celestion speakers.

Now most guitar players love to ability to edit their tones like this. So you’ll probably love this feature in BAS Amp 2. Seriously, it’s endless (and I’m lost…lol!). There’s also some cool editing features with the cabs, speakers, and mics.

**Oh, and this is the tone I’m used for my recent album Masterpeace!

I hope you enjoyed the video and I’d love to know your thoughts on my BIAS Amp 2 Celestion metal tones.

Be sure to leave your comments below and let me know which one is your favorite.

Welcome to the Jason Stallworth Music Gear page! Below you’ll find all the END_OF_DOCUMENT_TOKEN_TO_BE_REPLACED

To date, this is the absolute best heavy metal guitar tone that I’ve END_OF_DOCUMENT_TOKEN_TO_BE_REPLACED