How to Play Metal Guitar for Beginners: 6 Techniques You Must Learn

Are you a beginner guitar player and want to learn how to play heavy metal guitar? Or have you already learned the guitar basics and now you want to learn a style that’s more complex?

In this post, I’m going to show you the 6 core metal guitar techniques that you need to learn for playing metal music.

Although this is for beginners, learning these techniques can be a challenge. But I’m also going to show you some tricks that I’ve learned over the years that will help you progress, faster! 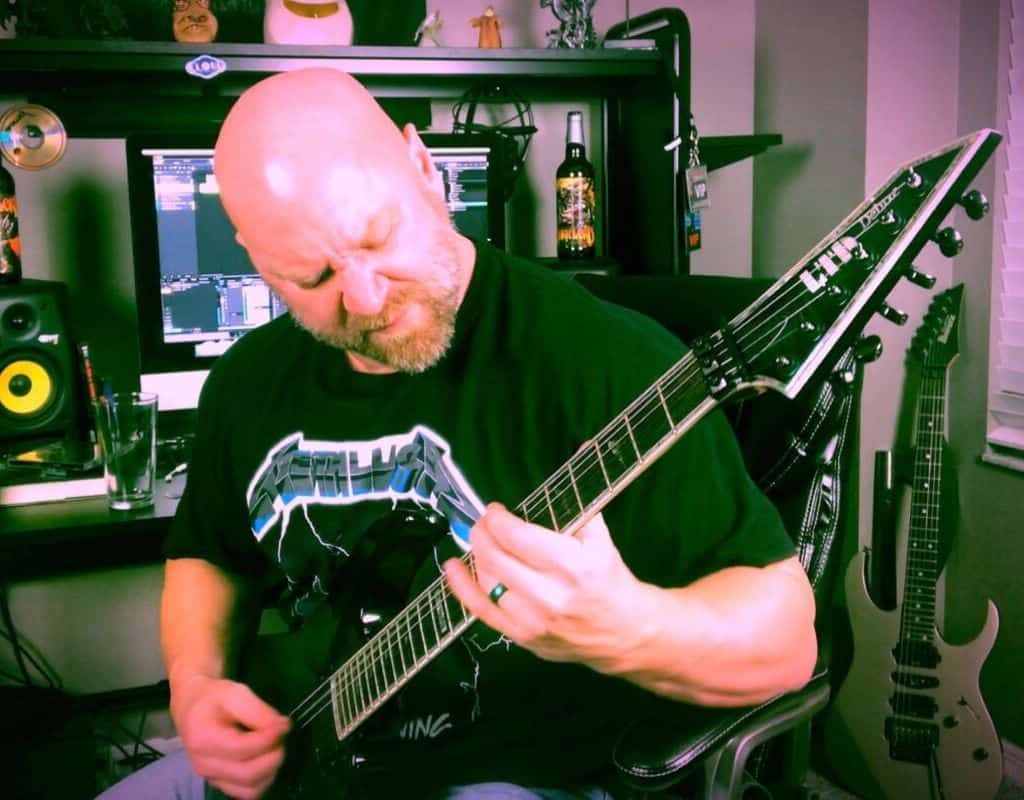 There are 6 core techniques to playing metal guitar. Of course you eventually learn to expand on all of these, but for now we’re going to keep them super simple.

The premises of metal music lies within the dark depths of that distorted tone. And the methods you’re about to learn compliment that darkness. Hopefully that didn’t sound too cheesy!

Here’s what you’re going to learn:

Check out my YouTube video below that I made for you. I go over each of these metal guitar beginner techniques and there’s also lessons with guitar tabs. So make sure you practice those!!

Now let’s go over some metal guitar tips for each technique. I’m going to expand on the video and show you some more ways to enhance your guitar skills so you can start playing more metal!

I’m going to go out on a limb and say that power chords are the first step to playing both rock and metal guitar. These chords accentuate the ‘heaviness’ of metal music.

Dial back a few decades and you can hear Black Sabbath making power chords the standard for heavy metal music. However, the actual invention of power chords seems to have come from Link Wray, known as the ‘father of the power chord.’

What are power chords? As you learn in the video above they’re quite simple. It’s just the root note played with the 5th note.

Here’s what a E, G, and C power chord looks like:

*You can see that the G and C power chords are virtually the same, just on different strings.

This is pretty much it for power chords. You can play this almost anywhere on your fretboard using the first 4 strings.

2 – How to Palm Mute Properly

Second to power chords, palm muting is something you’ll hear in practically every metal song. It’s that sound that just reaches out and grabs you, and gives you a mixture of emotions from aggression to extreme inspiration and fulfillment!

Palm muting is that chunky sound you hear that sounds like a ‘freight train coming your way’ – no, I didn’t mean to steal that from Metallica’s  song ‘No Leaf Clover!’

​My trick for palm muting properly is this…

​​​​​This may be difficult to remember because when you’re playing metal guitar, it’s sort of like you’re playing with this attack. But for this specific technique, you have to back off a little. ​​

The kings of downstrokes start with the Big 4:

…as if I need to name all that out for you!

Of course it doesn’t stop there. Bands like Testament, Exodus, Keator, Overkill and a long list of others were right there with them.

The concept of downstrokes is simple. It’s just picking downward. Where it get complex is when you start playing faster.

My simple method for getting faster at playing downstrokes is this:

You can also add in more notes and challenge yourself more once you get to a comfortable point. Or just learn Megadeth’s into to Tornado of Souls! That’s a tough downstroke song to play!

Riffing isn’t really a beginner metal guitar technique. However, I included it in this lesson because I want you to get used to riffing from the start, because it’s a crucial part of metal music.

Riffing is simply playing single notes in that area of the fretboard you play your rhythms in. Or you can think of riffing as playing lead guitar in the rhythm section.

I give you a simple riff with guitar tabs in the video. But here’s another extremely simple riff you can practice, and what to do once you get it down:

If you were to just learn and master the first 4 metal guitar techniques above (hey, we could call these the Big 4…lol!), you’ll be doing awesome!

But when I made this video, I felt the need to expand a little further. And now we’re talking about alternate picking.

Alternate picking is the opposing concept to downstrokes, so to speak. Simply put, you’re picking back and forth. So when you hit one note with a downward motion, you’ll pick that second note with an upward motion.

Now we’re sort venturing away from beginner guitar techniques to more advanced. But I since you just learn alternate picking, you might as well take it to the next level.

You may be thinking ‘What the hell is galloping?’

Listen to the intro of She-Wolf from Megadeth’s Cryptic Writings album. That’s the perfect example of galloping.

In short, galloping is 3 notes that are quickly alternate picked. It’s almost like a snap…

Some also call these triplets. I personally like galloping because I think it sounds cooler. And I teach you this in my video at the top of this post (starts around 14:51 of the video).

I suggest practicing this technique on the open E string, starting slow until it registers with you. It feels a little weird at first but you will eventually get this down. Practice everyday and gradually build your speed.

From Beginner to Advanced Metal Guitar 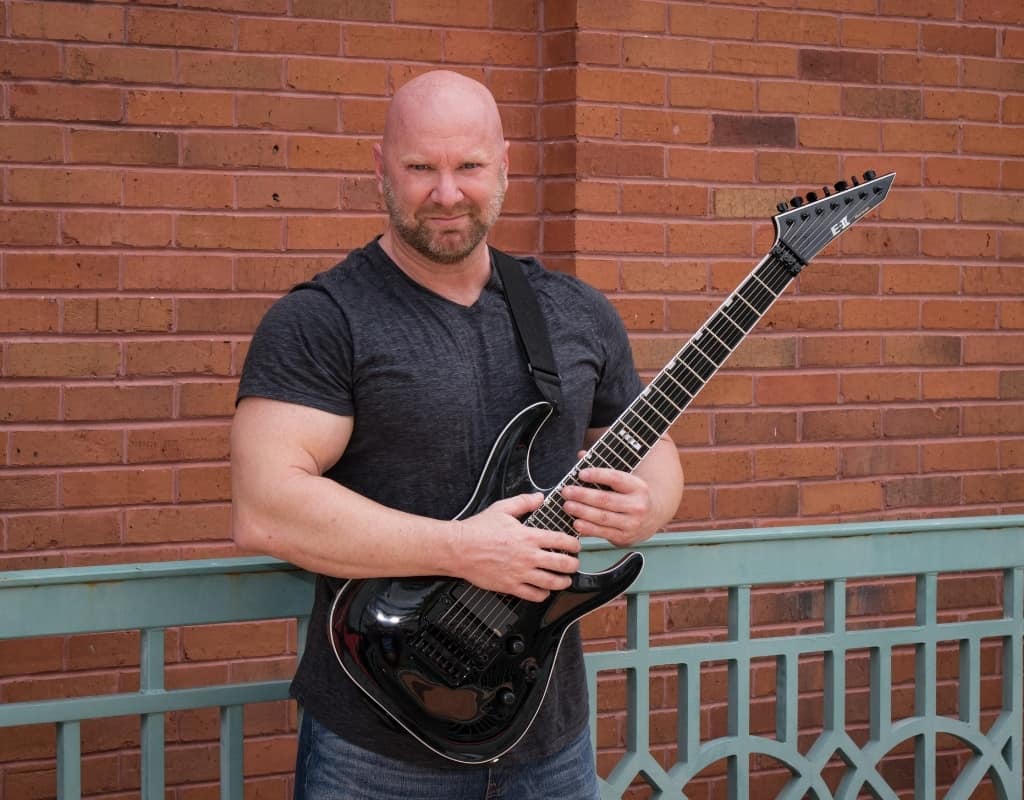 If you really want to get good at playing metal guitar, you must practice everyday! Make this a priority and schedule it, just like you would anything else that’s important in your life!

To add, practice metal guitar. If that’s what you really want to play, then don’t bother trying to learn blues scales or jazz or whatever else. I’m not saying those are ‘bad’ but if your heart is set on playing metal, then play metal. You’ll inadvertently learn a ton of other stuff just by playing metal anyway.

I also recommend focusing on just 2-3 techniques for each guitar practice session. You could follow a similar schedule like this…

The point is to know what you’re going to focus on when you pick up your guitar. Don’t just play random songs or whatever. I know that’s fun and all, but you’ll get a lot further, faster if your metal guitar practiced sessions are focus.

And watch the video over and over. Remember, you can pause it whenever you want and practice those patterns I give you.

Welcome to the Jason Stallworth Music Gear page! Below you’ll find all the END_OF_DOCUMENT_TOKEN_TO_BE_REPLACED

To date, this is the absolute best heavy metal guitar tone that I’ve END_OF_DOCUMENT_TOKEN_TO_BE_REPLACED