In this post, I’m going to give you all the settings and juicy details of the awesome metal tones I dialed in using the Fender Mustang IV modeling amp.

You’ll also learn why I believe the Fender Mustang IV is the absolute best modeling amp in its class.

Why I Bought the Fender Mustang IV Modeling Amp 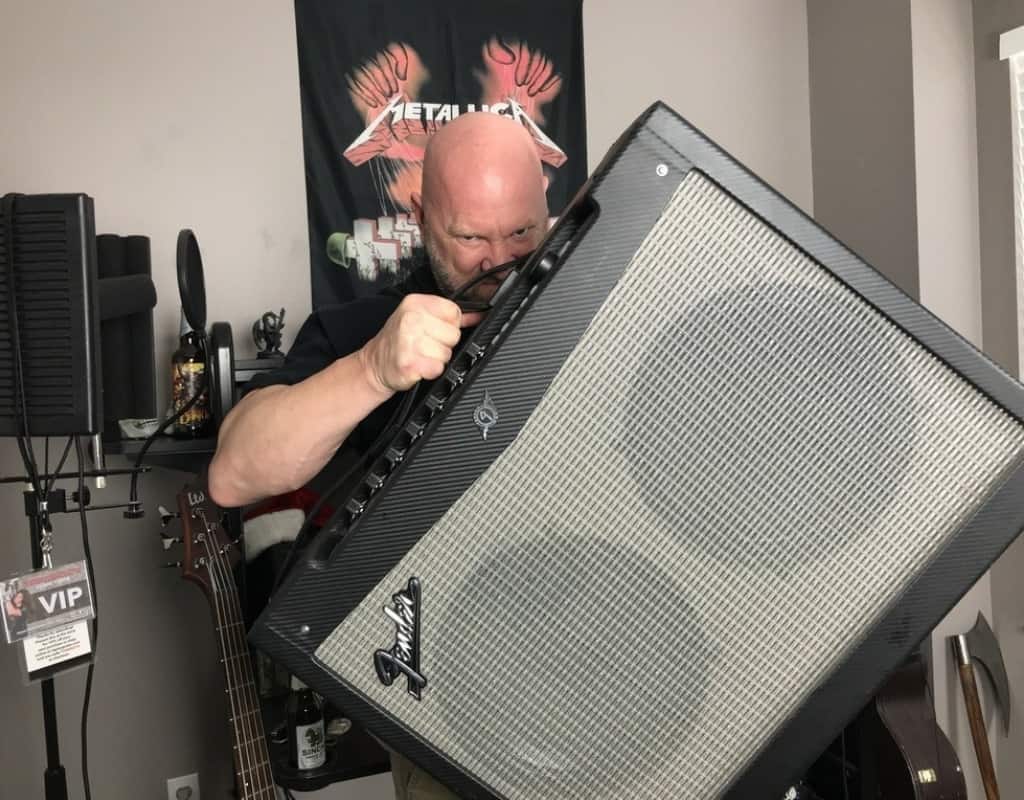 I want to share a little background on what made me choose this amp in the first place. This is gonna sound strange coming from a seasoned guitarists (since 1990) but I hadn’t owned an amp in years before picking up the Fender Mustang IV.

At this point in my life I was not in a band and was set on working in my own home studio writing and recording my own music.

So I technically didn’t need a huge tube amp.

I had been relying on my KRK studio monitors and headphones for output and was using my POD HD500 and several VST plugins for tones.

Again, I wasn’t playing live so I didn’t see the need for a guitar amp.

However, I got tired of having to connect my computer and pull up the software when I wanted to just jam or practice. I wanted the freedom to be able to simply plugin and start playing.

I had played through this amp a couple of times and of course most of the tones I thought were amazing for cleans and rock/hard rock. This was good enough for me to use for practicing.

And to me, the Fender Mustang blows away all other amp modeling amps in its range. One of my good friend’s wanted to sell his and gave me first dibs, so I picked it up and couldn’t be happier.

This is my first video on the Fender Mustang’s Metal 2000 amp tones. I understand this is amp modeling with a variety of tones but I really didn’t expect it to have a good amp model for metal.

I was extremely surprised (and extremely happy) when I plugged in and start dialing in my tone using the Metal 2000.

I didn’t expect to do any more videos or tone demos for this amp. Lo and behold, almost four years later, here we are…another video!

I guess what made me want to put something else out there is I play through this amp on a regular basis for practice, which I attempt to practice everyday.

And this is the amp I pull up every single time.

The difference with Video 2 is I felt like I got a better recording for this video, thus giving you a better demonstration of the what this amp can do.

First let me go over how I recorded the Metal 2000 tones you’re hearing in the video.

I used the Shure SM57 mic snug up against the speaker. I had the mic placed about an inch to the right of the cone. This gave me a slightly darker tone, which is what I prefer.

I recorded the track using my Presonus Studio One Pro 2 software and the mic was run into my Presonus AudioBox USB interface.

My settings are fairly simple with pretty much amp or amp model I use. I learned a long time ago to not over complicate things when it comes to tones and amp settings.

I’d rather spend time practicing, writing, and recording my own music going through the chaos of searching for the perfect tone that doesn’t exist.

The Metal 2000 amp model has a ton of saturation but it’s a very clean distortion. You can distinguish each note as the tone is not muddy.

I’m not sure what this is modeled after but to me it sounds like a mixture between an ENGL and Peavey 6505.

My lead and rhythm tones for the Metal 2000 amp are pretty much the same. For my leads I add a little more gain and I bump the mids up just a hair.

The lead tone on this amp soars and you can milk notes all day. Keep in my I’m playing at a volume of anywhere between 1 and 2 (maybe 3 when miking the amp to record).

The clarity of the notes is amazing, especially with the amount of saturation. Many amps have that problem of loss of clarity with increased saturation, which convinces me even more that Fender had the 6505 amp in mind when they created the Metal 2000 amp model.

I’m not certain what the Fender Mustang IV American 90s amp is modeled after. But if I had to guess, I’d say a Mesa Dual (though I could be wrong).

Either way, the tone is tight and your notes are pronounced with this amp model. It’s built for metal music, but could also be used for most any rock-style of playing with the gain backed off.

I also recorded this amp with the Shure SM57 mic going into my Presonus AudioBox interface (using Presonus Studio One Pro recording software).

I recorded my usual two rhythm tracks and hard panned each. The lead track is up the middle.

This is the 2nd video recording I did for the Fender Mustang IV; the Brit 80s model. I have to assume this is modeled after a Marshall amp, given the tones I’m hearing.

I’m glad I did, because once I decided to dig in a little, it didn’t take much time at all to dial in a solid rock and roll tone – a tone that I was floored by (and you’ll hear it in the video below).

I found the Brit 80’s amp model doesn’t have a lot of saturation, which I guess is expected. It does hold a decent sustain and the overall quality of the tone is superior to any other modeling amp I’ve heard for rock and hard rock tones.

I also like the fact that if you back off the gain a little on the amp you get a nice, full crunch tone. This is perfect for parts of songs that don’t require as much distortion and also for those bluesy leads.

Actually, I was more impressed with the recorded tones I heard during playback than I was with the actual tone I hear when I play. I didn’t use any post processing EQ or compression.

It’s the raw tone coming from the Fender Mustang IV Brit 80s amp model. I do think the mic placement made the tone a bit darker (which is what I lean towards in all my tones; I’m not a fan of those super bright guitar tones).

Are you ready for one of the most beautiful, sparkling clean tone you’ve ever heard? Welcome to the Fender Mustang IV ’65 Twin model (almost sounds like I’m shooting a commercial!).

Of course we wouldn’t expect anything less from a Fender amp, whether it’s a tube, solid state, or modeling amp.

There is a warmth that you get with a tube amp that the Fender modeling amp doesn’t capture (after all, it is a solid state amp). But I challenge you to sit back and just listen to the sound and tone of this amp model.

And if you can record this, that’s even better. I think you’ll be amazed by the tones you hear!

My settings below are like all of my Fender Mustang IV amp settings – extremely simple.

You can add the sine chorus effect with some reverb  (I’ve listed those settings below as well) for a spacious ambient sound. 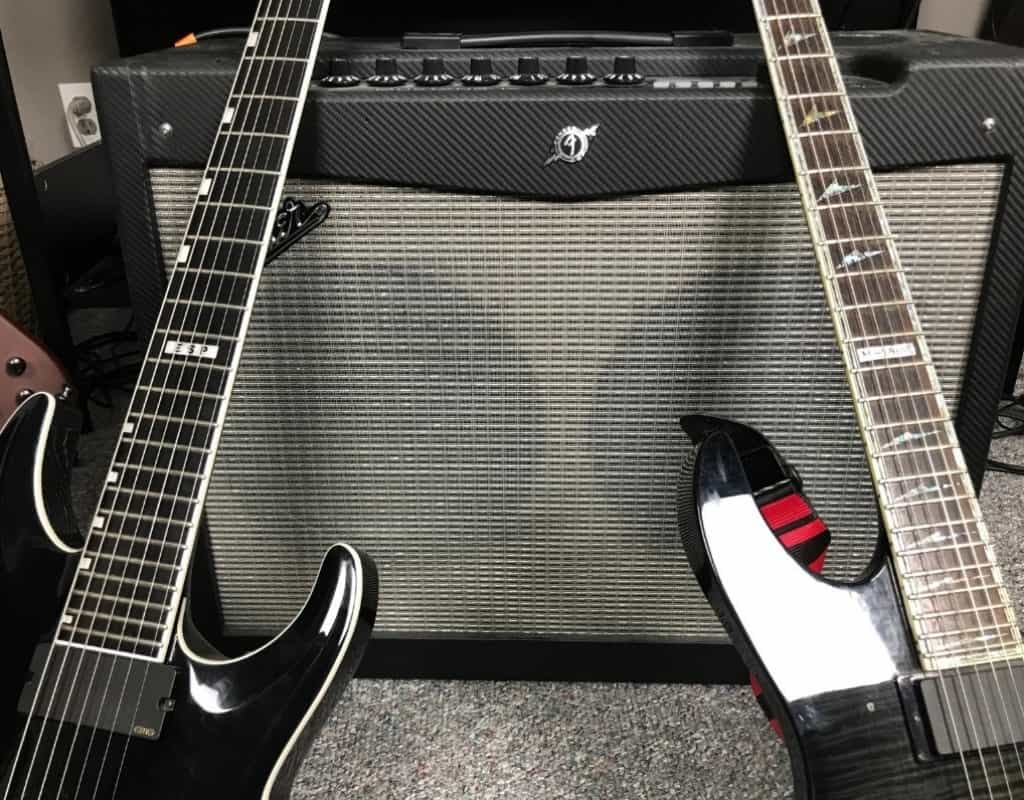 So far you’ve learned that the Fender Mustang IV modeling amp can handle everything from clean to rock, to metal tones. But what about extreme metal, such as metal played with a 7 string guitar?

There was only one way to find out, and that was to record the tracks in a full mix.

You see, it’s one thing to plug into an amp and jam or practice, or whatever. Sure, you may dial in a tone you’re happy with in the room. But the true test is how it sounds in the mix!

I miked up the Fender Mustang IV with my Shure SM57 mic, and plugged in my 7 string guitar.

When you to this, ask yourself… 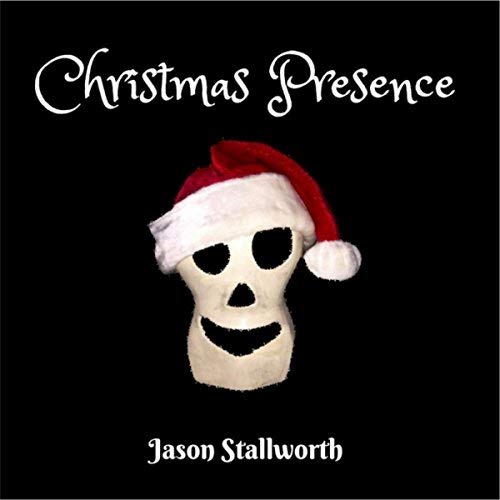 In the world of effects processors and amp modeling plugins, I wanted to record a song using a live amp. And I’m not talking about using the direct out either.

So I threw my Shure SM57 mic in front of the Fender Mustang IV (same as in the videos you heard above) and started recording tracks for a single I wanted to release.

This is a rock instrumental called ‘Christmas Presence.’

LISTEN below and hear how awesome these rhythm tracks came out…

**Make sure you add Christmas Presence to your Rock instrumental and Christmas/Holiday playlists!

I originally intended to only use the Fender Mustang IV as a practice amp. But who knew I’d actually end up using it to record a song that I would release professionally.

One thing I’ll add about the Fender Mustang IV amp in general is it encourages me to play and practice more. If you have a crappy tone, even if it’s just for practice, you’re less likely to pick up your guitar. And I’m inspired just about every time I sit down and play through this amp.

**You can read more about the Fender series of modeling amps on their website here: https://www.fender.com/pages/modeling-amps

Like I said in my first Fender Mustang IV video for the Metal 2000 amp model, I’m amazed by the tones that come out of this amp.

And let me be clear about something in regards to amp models; I’m not looking for an amp model to sound exactly like the amp it’s supposed to be modeled after. Really, I could care less. As long as I like the tone I hear coming out, I’m happy.

Welcome to the Jason Stallworth Music Gear page! Below you’ll find all the END_OF_DOCUMENT_TOKEN_TO_BE_REPLACED

To date, this is the absolute best heavy metal guitar tone that I’ve END_OF_DOCUMENT_TOKEN_TO_BE_REPLACED

Whether you’re playing live solo gigs or playing with a full band, you END_OF_DOCUMENT_TOKEN_TO_BE_REPLACED